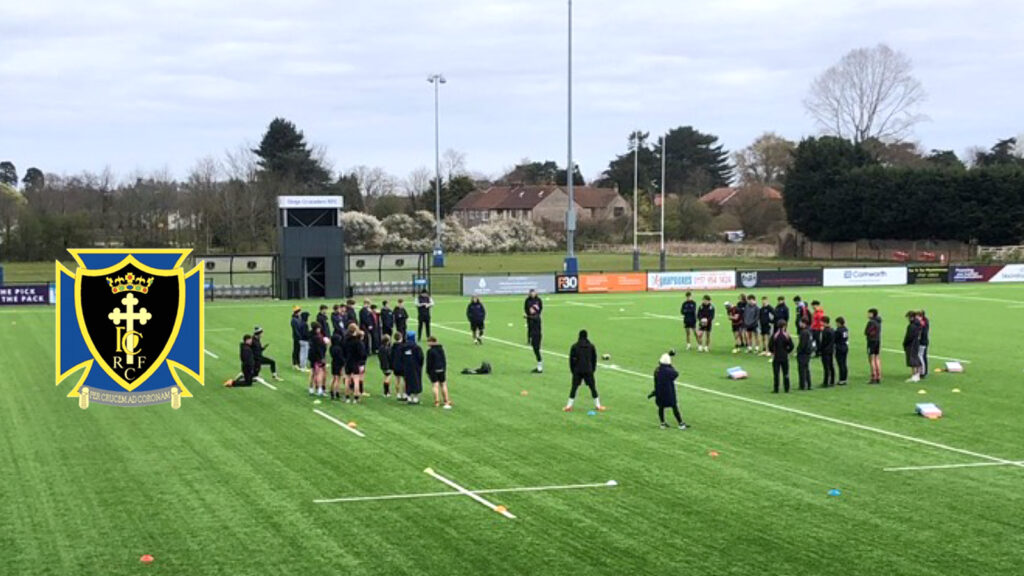 UR7’s at Dings
‘’Rugby, what a beautiful and passionate game
It’s not about money, fashion or fame.
Invented one day by a guy named Webb
How do go “I have a game to play”?
A war that’s fought on a muddy field
They’ll give their last breath to insure victory is sealed.
The pride of a nation rests on their shoulders
They have the heart, they’re stood like boulders.
It’s not about winning and they know
We’re a rugby nation, we wanna see heart and a good show…’’
Bleddyn Pullen

The 71 miles from Great Tew to Frenchay started slowly, as we wound through the chalky Cotswolds down to Gloucester, and then accelerated to warp speed as we hit the M5, en route to England’s tenth largest city. Like a satellite being pulled into a gravity field, we did the last 10 miles incredibly quickly.

Frenchay sits about five miles off the motorway. Described as a village on the North East of Bristol, a recent spate of violent crimes tells you, it’s now definitely been fully urbanised. The village was first recorded in 1257 as Fromscawe and later as Fromeshaw, meaning the wood on the River Frome.

We were off to play rugby, but the village is really known for cricket. That bearded Victorian superstar, WG Grace, captained Frenchay’s cricket team in the 1870’s. There was no sign of the Big ‘Un today.

Our destination was Dings Rugby Football Club, which sits between Frenchay and the M32. The lavish site with its own 4G pitch sitting beneath an Allianz Park style clubhouse screams large property deal; a shrewd move, which must have netted, land and money and a lot of bling in Ding to boot. A little research tells you that Dings performed a one-mile hop, skip and jump over to the East of the M32 in 2014. The move has totally relaunched the Club.  Its new, quasi-premiership facilities sit opposite the old Frenchay Hospital, now covered in Redrow houses. The only memory of that Victorian edifice is the red brick Art Deco-ish water tower, now converted into quirky, luxury two-bedroom flats. The penthouse flat sits in high relief with a glass top hat, a bit like a smart air traffic control tower, gazing down on the emerald green 4G pitch with its own uber- white runway markings.

UR7’s had taken the Club over for the day, laying out their banners and positioning their player-coach ninjas to cover the pitch. All clad in black with their distinctive pink Sabio branding, these coaches are the epitome of elite sport: quiet and courteous, but oozing knowledge and ability.

The boys rushed off to register and join their different player bubbles. The four age groups’ areas were demarcated in the corners of the 4G with coloured cones, just like field events at a School Sports Day.

Out of the car and straight into the programme….

0940… meet your bubble and organise your kit… 0950 shed your tracksuit, 1000hrs group warm-ups for 25 minutes… Then a drinks’ break, then 3 ‘25-minute learning sessions’ labelled with characteristic understatement: Return to Contact; Positioning; Decision Making.

The warm-up was super slick with 60-70 players of all age groups lined up down the long side of the pitch, all genuflecting in unison like a 1980’s aerobics class. The Lead Instructor addressed the whole field, like a Drill Sergeant on parade. It reminded me so much of the Army as the words were few, all carefully chosen, and issued as commands.

Players moved in unison, and what seemed complex was made to look simple.

All the coaches joined in, quietly leading by example.

The apprentices were all attentive. Walking, jogging, running, sprinting, plyometrics, stretching. The process built up like a symphony from the Introduction to the explosive Finale.

The first thing you notice about Sevens’ players is how small they are, compared to the monsters of the Fifteen’s game. It is a bit like Einstein’s equation for relativity E = MC2. So, in Sevens: Huge Space* Small Numbers=Fast and Agile Players. Thus, players are often under six-foot tall, wiry, and ultra- athletic.

The idea behind today’s Covid Catch -Up session (2 sessions squeezed into 1) was to learn in the morning, and then showcase your newly acquired knowledge during an afternoon of matches.

The training was quiet and methodical. Just as well, as the M32 was pretty noisy all day. A demonstration led to a short series of player repetitions. There was so little talking. There were even fewer words of command. Everybody just seemed to get it first time. That was all about the concentration, which arises when enthusiasm meets inspiration.

Back to Contact was like the Ben Affleck kendo scene in the movie Paycheck. The coach called out a sequence and the player on the dojo mat had to move in that order, skidding along the 4G surface like a sea- skimming missile to take out pygmy- sized tackle bags in the North and South corners and then bossing tackle guards in the East and West.. Everybody got two goes and boy was it competitive. Nobody wanted to flunk the sequence or miss the chop tackle.

If the first practice was martial arts on the mat, then the second was like chess at speed: throw a pass, then move back and sideways three squares into the same position relative to your neighbour. It flowed from one side to the other like the arm of a ticking metronome. The only difference was that music’s tempo maker doesn’t move in 3 dimensions as well. The boys had to move back and to the side in preparation for the momentum flow to come back the other way.  The beauty of this system is that if you persevere with it, you are always in the right place to receive the ball. Now,there’s an incentive.

The final lesson was about stressing the brain by squeezing 15 players into a tiny pitch and getting them to move the ball around in different ways to score a try. Rather like Wizard Dumbledore bringing on 15 Harry Potters, the elite players joined in the game. They demonstrated how to attack from deep and come around the corner at pace rather like the lash of a whip uncurling as it builds momentum towards its strike. Of course, when you really want to be somewhere and to learn from experts, there’s nothing like walking their walk. You learn fast.

There weren’t many parents there which made one wonder whether they all had found friends in Bristol with gardens and firepits to fend off the glacial temperatures. Hardened as we were to Siberian winds on the fields of Greystones, aka Chipping Norton Rugby Football Club, we stood out there through blizzard and shine.

Two other parents had jetted in from Kenilworth RFC, which has just done the same property deal. With £24m, they could start a bank. However, the artist’s impression of their new clubhouse and 4G pitch was similar. No I mean identical to Dings. Clearly some Tony Pidgley figure is travelling around the country repeating the same process.

The morning was as mesmeric for patents watching, as it was for the player apprentices. Each player had two goes at each serial and there was definitely some assessment going on. The silence of the coaches just added pressure as the day went on.

The clubhouse was so smart that it begged further inspection. Still pristine after 5 years it had everything except a Rick Stein outlet. The walls had a long gallery of photographs, tracking the club from 1857 to 2020. As far as we could see, Dings has only had one England player, Arthur Payne who was capped for England v Ireland at No 8 in 1935. It just goes to show that the alchemy of nurturing elite athletes is a mysterious business. Rather like growing grapes for fine wine, the soil needs to be right, the vines need to have been properly matured and be husbanded over many years. Oh and the weather has to be right too. So, the lesson is simple, pure investment simply does not lead to an immediate winning vintage.

Let the games begin. The boys had been warmed up again and they were divided into mixed teams of U14s and U15s. Four 4 short matches over a full field,

Luminous green and orange shirts lined up against each other, the whistle blew and one of the Orange U15s kicked off. Thump. Then the ball arced and spun high into the blue sky and then fell in a lazy parabola to the green surface.  The boys were a little hesitant and rushed at first but after a few minutes a rhythm developed. Players slotted their Positioning tape into the deck and the ball flowed from touchline to touchline. Back and forth it flowed until space was found for one of the speedsters to cut through a gap. It was touch rugby but the tagging soon became shirt -pulling and then swinging players by the shirt. The game became visibly more competitive. Plus ça change. The coaches kept swapping players around and the subliminal vibe was this is a selection process. Soon everybody was flexing their backs away from the clawing hands like bow staves bending to deliver an arrow. Players began to smile, to express themselves, remembering the inside pass and the kicking option. Cross field, grubbers, chips, fly hacks, they all flooded into the repertoire. It was good to see the young players express themselves. The trick was to make a decision fast and then back it with conviction. Tackles were simulated with the two opposing players lying flat on the ground and the ball being pushed back for the scrum half to recycle. Unlimited touches incentivised accuracy and avoiding mistakes. Any infringement and  the ball was turned over to the other side.

Conversions were made time efficient by being taken in reverse from the dead ball area towards the centre of the field. Everything was so slick and so fast. Scores built up and every few minutes the players were rotated into a rest phase.

The way scratch teams came together over four short matches was really quite remarkable. Players grew in confidence and expressed themselves with trick passes and chips like jazz musicians syncopating on a sax.

Then as soon as it had started, it was over and the stretching and debrief happened as quietly as the warm-up. No big speeches, no papers handed out, just quiet doing at the highest of levels.

That’s elite sport for you. If you are blessed with the opportunity, the first thing you realise is that it rubs off. The skill and techniques are somehow translatable into other pursuits including academic work and leadership.

As the crowd dispersed towards the car park and then the M5, the familiar cry went up for food and treats. Macky D’s was one rallying cry but not alone.

There had been call for good nutrition and eating natural food of many colours.

So, as we stopped at Gloucester’s nation -leading service station, the options were different, squash and a sausage roll. It said on the packet that it was made from wild boar. Well, as the boys tucked in, it was clear from the wrapper that the meaty roll came from the Forest of Dean. It was none too shabby. Lots of natural colour in the squash too! The food of champions.