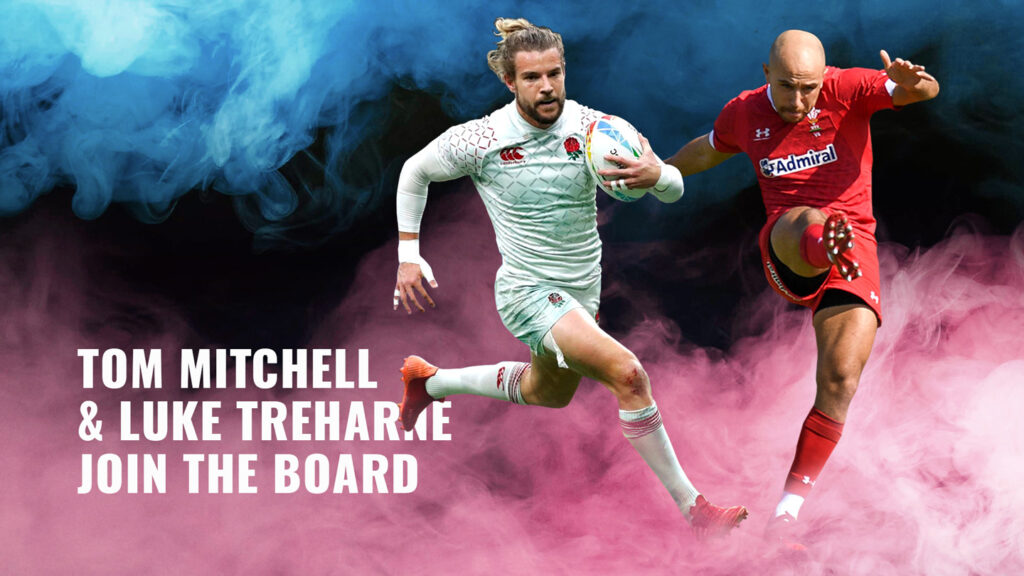 Wales Men’s 7s Captain, Luke Treharne, and England Men’s 7s Captain and Team GB Olympic Silver Medallist, Tom Mitchell, will be joining with immediate effect and will help shape and deliver the long-term vision of Ultimate Rugby Sevens, including our National Sevens Academy. In addition, Tom and Luke will apply their skills and knowledge as coaches and mentors to the Academy players.

Tom Mitchell commented on the announcement, saying, “I have always enjoyed what Ultimate Rugby Sevens stands for and I am excited to contribute to those strong values. Alongside this, I am driven to play a role in the growth of the company so that in the future we can continue to positively influence more and more young people.”

During a period of such uncertainty around sport, both at the elite level and right the way through to grass-roots, it is a statement of Ultimate Rugby Sevens’ conscious intent to build a foundation for the future.

“Clearly I’m delighted to have secured the knowledge and services of two individuals with such a breadth of experience within the game, both on and off the field. The relationship that each of them has with Ultimate Rugby Sevens goes back well before the beginning of my time as the CEO and I’m very happy to be able to confirm the nature of this more formal link.” said UR7s CEO, Barney Pascall.

The announcement comes just before the 2020/21 season kicks off on the 4th of August with a revised UR7s Summer Programme being delivered both on and off the pitch to all of the Academy players. Tom and Luke will join the Ultimate Rugby Sevens coaching team, made up of current World Series players and coaches from the Men’s and Women’s game, delivering world-class rugby 7s training sessions. Both have been heavily engaged in developing the programme during the lockdown period and worked with the Ultimate Rugby Sevens management team to ensure they’re able to maintain the quality that the Academy players have come to expect.

In a statement, Luke Treharne said, “I’m really excited to be more involved with Ultimate Rugby Sevens and the Academy. I’ve been coaching for Ultimate Rugby Sevens regularly since 2015 and have seen first-hand the growth and development that’s gone into the Academy setup. I really wish the Academy had been around when I was younger, as I would have loved it as a young aspiring rugby player. I think this is where my passion for coaching within the Academy comes from. There are lots of big ideas being explored so I can’t wait to offer my expertise as we look to grow the National Sevens Academy in the UK and further afield!”

Earlier this year the COVID-19 global pandemic forced the Academy season to be cut short. The premature end to last season has only contributed to the ambition of Ultimate Rugby Sevens to not stand still but to continue to invest in its players. Both Luke and Tom helped with player engagement during lockdown and, in them, Ultimate Rugby Sevens have two of the games more progressive players and thinkers.

Ultimate Rugby Sevens CEO, Barney Pascall, went on to say “I’m very proud and grateful for the efforts put in by the whole Ultimate Rugby Sevens management team, as well as the response from parents and players, to what has been a very challenging period for us all. We have tried to keep a progressive mindset throughout the lockdown and not allow the events today to negatively impact our plans for Ultimate Rugby Sevens and the Academy in the future. ‘Agile’ would be the word that springs to mind, as well as a collective approach using the network we have to draw upon to keep us on the right course. We have and will continue to invest in the players so that we remain a world leader in Rugby 7s. Tom and Luke share our values and our ambitions and we look forward to the next chapter with them on board.”

Released on behalf of Ultimate Rugby Sevens. For further information please contact Barney Pascall on (+44) 07769269216 or by email on barney.pascall@ur7s.com

Ultimate Rugby Sevens is a leading rugby 7s organisation promoting the game of rugby 7s across the world via our various media channels. The UR7s National Sevens Academy develops high performance in all walks of life using rugby 7s as the vehicle with our unique National Scouting Programme recruiting talented young players, from both the boys and girls sections, to join, both on and off the field. Ultimate Rugby Sevens also provides opportunities to play rugby 7s at grass-root level via our regional tournaments, offering another entry point into the Academy. With all of this combined, Ultimate Rugby Sevens provides and promotes a pathway from grass-roots to elite level rugby 7s in the UK.